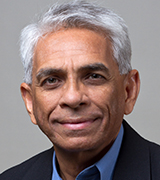 Salim Mansur is a political science professor at the University of Western Ontario, and the author of numerous books, including The Qur’an Problem and Islamism (2017), Delectable Lie: A liberal repudiation of multiculturalism (2011), and Islam’s Predicament: Perspectives of a Dissident Muslim (2009).

He’s made a name for himself in Canada as a former syndicated columnist for the national Sun newspaper chain, and also wrote for the Western Standard and National Post. His work has also appeared in the Globe and Mail, the Wall Street Journal, National Review Online, and the online journal of the Gatestone Institute, where he serves as a distinguished fellow.

As a consistent and conservative voice on foreign affairs and other aspects of public policy, Salim has been called on to testify before the Canadian parliament numerous times. He is an academic consultant for the Centre for Security Policy in Washington, DC, and a member of the board of Canadians Against Suicide Bombing.

In Canada, he’s the vice president of the Council of Muslims Facing Tomorrow, a group championing freedom, human rights and gender equality in the Muslim world and Canadian Muslim community.

Salim was the co-editor of The Indira-Rajiv Years: The Indian Economy and Polity 1966-1991 (1994) and has published in a range of academic journals, from Jerusalem Quarterly to The American Journal of Islamic Social Sciences to Arab Studies Quarterly.

Salim was born in Calcutta, India, and after arriving in Canada worked his way through school doing odd part-time jobs, including driving cabs. Eventually he earned a doctorate in political science from the University of Toronto. Before joining the University of Western Ontario, he worked as a research fellow at the Canadian Institute for International Peace and Security, in Ottawa.

He is a frequent analyst and commentator on radio and television. Salim was invited as a panelist on PBS' Jim Lehrer Hour and participated in the Doha Debates held in Qatar, broadcast on the BBC World Forum from London, England. Salim's book Delectable Lie was awarded the “Montaigne Medal” by the Eric Hoffer Book Awards for the “most thought-provoking title” of the year. Salim was presented in November 2017 with Canada Senate Sesquicentennial Medal in recognition of valuable service to the nation, in February 2015 with the POGG (Peace, Order, & Good Government) “Canadian Values Award” in Ottawa, and in September 2006 with the American Jewish Congress’s Stephen S. Wise “Profiles in Courage” award in Los Angeles.

Salim lives in London North Centre with his wife and daughter.